Working While on Dialysis – It’s Possible! 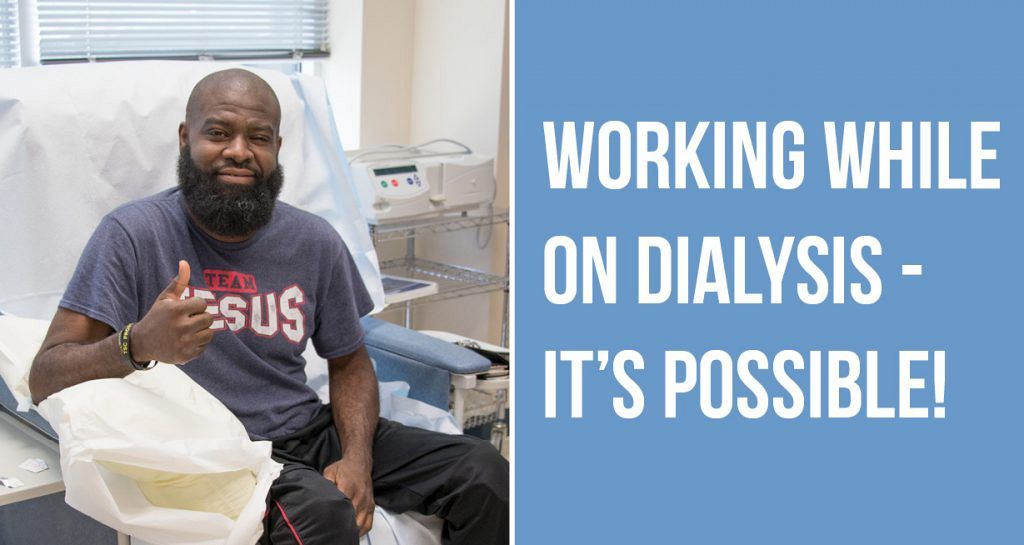 Every August the kidney care community highlights the benefits of working while on dialysis. Many dialysis patients believe they can’t return to work because of the difficulty in finding a job that works with their new schedule. In fact, one study found that approximately 71% of dialysis patients are unemployed.

But times are changing. With the increase of CKD being found in younger Americans, people are starting dialysis at a younger age. With home hemodialysis and peritoneal dialysis (PD) on the rise, people with kidney failure are regaining control of their lives. Returning to work and maintaining a career is a more viable option. In fact, one article mentions that many employed patients report having better general health, more energy, and less pain. So, we’ve asked three DCI dialysis patients who are employed what advice they would give to those looking for employment, here’s what they had to share.

Find the right treatment that allows you to work

Mr. Douglas* has worked for a property management company for 41 years. Through his job he met residents on dialysis. After being diagnosed with kidney failure in 2012, he found himself surrounded by dialysis stories.

“It seemed like when I was diagnosed with kidney failure, I ran across even more people on dialysis,” explained Douglas. “People would tell me they were exhausted doing in-center hemodialysis three times a week. It got me thinking and I hit the books to learn more about that.”

With his love of travel, his desire to spend time out with friends, and his resolve to continue working, Mr. Douglas decided that peritoneal dialysis was the right treatment option for him.

“Being on dialysis doesn’t have to stop me from doing anything I previously did,” stated Douglas. “I run 10 and-a-half hours on my cycler at night. Monday through Thursday I’m in bed and connected to my peritoneal dialysis machine by 8pm. I’m out of bed and ready to start my day at 6am. I’m at work at 8am. On the weekends I can start later because I can sleep in on Saturday and Sunday.”

In-center hemodialysis, home hemodialysis, peritoneal dialysis, and a transplant are all treatment options for kidney disease. Explore the options with your doctor and find the treatment that allows you to work.

Communicate with your employer When 24 year old Ashli was diagnosed with kidney disease, she was surprised. By age 28, she was entering kidney failure and facing the fact that dialysis is a time-consuming process.

“I started on in-center hemodialysis. It was difficult maintaining a consistent schedule at work and on dialysis,” stated Ashli.

An inconsistent work schedule led to inconsistent pay. The lack of financial stability was starting to take a toll on Ashli.

“When working at a childcare center, you’re reminded that kids need consistency. I felt really guilty when I’d have to miss work. And I felt like my employer didn’t understand the reasons why I’d have to be away from work.”

Working full-time with a chronic condition can present challenges for the employer and the employee. Ashli believes clear communication is essential for a good working relationship.

“It’s scary. You are putting yourself out there, but you have to be able to explain kidney disease and dialysis.  It helps if you can share educational material with them because they probably don’t know what kidney disease is.”

To foster clear communication with your employer, read the Keeping a Job with Kidney Disease section from Life Options, “A Kidney Patient’s Guide to Working & Paying for Treatment.”

Start your own business Lloyd Wade Jr., is a father of two sons, living in Antioch, Tenn. Several years ago he had purchased into a franchise janitorial company and since then, built a successful reputationin town for stripping and waxing floors, carpet cleaning, grout cleaning, and more.

But in August of 2017, Lloyd found out he would need dialysis treatment, which would interfere with his responsibilities as a franchisee. He admitted that starting dialysis was a difficult transition for him, as his oldest son was about to graduate high school and he was already adjusting to life: juggling his business, fatherhood and a recent surgery.

A prescription for dialysis never comes at a good time, but Lloyd remained positive because of his faith and support system. Although Lloyd started with hemodialysis for the first two months, he quickly switched to peritoneal dialysis. The convenience, he shared, allowed him to maintain more control over his life and energy.

“I can get up and do whatever I got to do during the day,” he explained. “Then whatever time I decide to come in and go to sleep, that works perfectly fine.”

When Lloyd started showing initial symptoms of kidney failure, he sold his share in the franchise. But remaining unemployed was never part of his long-term plan. After he started feeling better and learned how to manage his peritoneal dialysis, he hit the ground running. Using connections from his old business, he was able to start building a new business focused on small janitorial projects until he worked his way back into the market again.

“I would tell people not to be afraid and get out there and do it on their own,” he said. “It doesn’t take much to become a business owner. Then you can work on your own terms.”

Creating his own business allowed Lloyd to be in control of his own schedule. If he needed to rest, he could. He could take on as much or as little work as his health would allow. He attributes the success of overcoming the initial obstacles of starting his business to his DCI social worker, Beth.

“Before all of this, I had never dealt with a social worker. I didn’t know anything about a social worker. But I know now if I ever have a question about anything financial or just anything that could be in my way, I would definitely ask her,” Lloyd explained.

Now Lloyd is training his oldest son, Trayvon, on the ins-and-outs of the trade. Trayvon has recently graduated from high school and expressed he would like to take the business over. Lloyd now has the opportunity to supervise without the manual labor of being on the floor.

“I’m blessed to have kids who not only care about me, and my legacy, but they just care in general,” he said.

Running his own business was the right next step for Lloyd and his family. With the rise of remote work opportunities and computer-based jobs, working from home or starting your own business may be an option for you. Consider talking with your social worker and support system to see what options are available to explore.

Remember, there are options available to help you work on dialysis.

You don’t have to do this on your own! Make use of the employment support services available to you. Talk with your nephrologist about your treatment options. Consult with your social worker about employment resources in your community. Communicate your current needs with your employer or be courageous enough to look for a more suitable job. Mr. Douglas told us that being on dialysis doesn’t have to stop him from doing anything he previously did. Don’t let it stop you.

*Name changed at the request of the patient