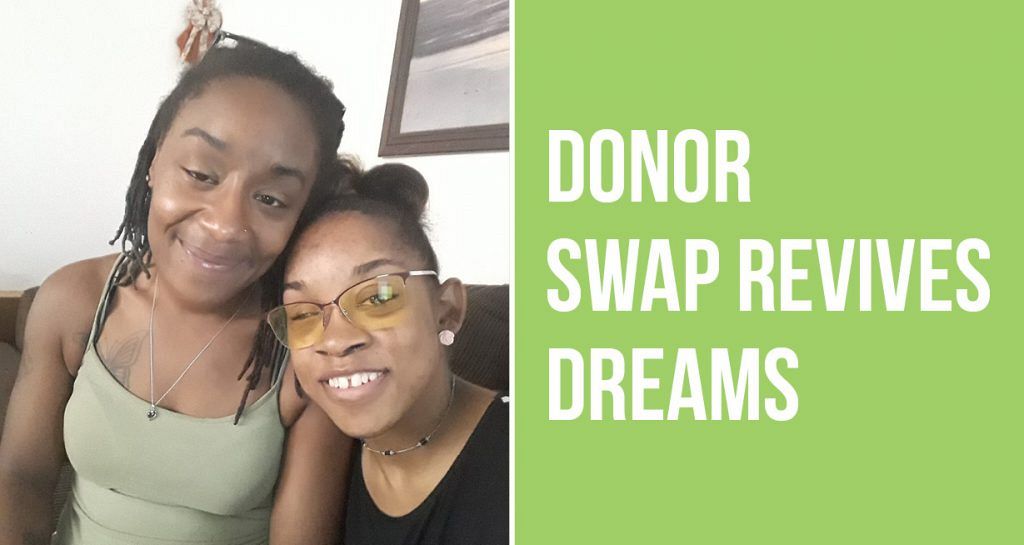 At 29, Erica Boles has dreams of being a mother and nutritionist. But just a few months ago, those dreams seemed far off, and maybe even impossible. With her weekly dialysis treatment, it was hard to find a nutritionist program that fit her schedule. And early on, she was told that while she was on dialysis, it would not be safe for her to give birth to a child.

Erica’s kidney disease journey began in 2010, when she had difficulty breathing and went to see her doctor. Her doctor diagnosed her with Type I diabetes, and less than two years later, her doctor shared that Erica was now in Stage 3 kidney failure. By 24, she was told she would need a transplant or dialysis to survive.

My sister wanted to donate a kidney to me then, but she had antibody issues,” Erica said.

Erica began learning more about her disease through the REACH Kidney Care program her doctor referred her to. It was there that she learned how important the will to live is. She realized staying alive was not just about making physical changes to her diet and lifestyle. She was able to stay positive because of her optimism, faith, prayer, and powerful support system.

Having a support group is so important. Everyone doesn’t have that support system, like I did,” Erica explained. But the main thing that kept me going was my faith and just praying to God. Even though at times I’d get down, for the most part, I’d pray to God in my down moments and that really helped me.”

Before she had to undergo dialysis, Erica wasn’t even sure she wanted to register for a transplant. But after learning and researching her different options, she realized a transplant was her best chance to get back to her old normal life”. After experiencing the life-altering effects of kidney failure and having to undergo dialysis, she realized how important the message of early intervention and remaining positive was. Over time, her REACH Kidney Care team began to feel like family. She knew that she too, wanted to share her story and teach others about the value of kidney health.

I really don’t want people to go through what I went through,” Erica reflected. I’m glad I had REACH to go to and help me. Not only did they watch out for me on the physical level, they were there for me emotionally. They made a difference. They were so positive, and it made me feel positive. They gave me hope.”

Although Erica’s sister, Natasha, wasn’t a match for Erica, they had learned about the paired kidney donation program. This is where two living donors can essentially swap” kidneys for their loved ones if they are not compatible donors. After more than three years on peritoneal dialysis, Erica learned their was a living donor in the swap program who was a match for her. Erica would finally be receiving a kidney!

Within 3-4 weeks of the call from the transplant coordinator at Vanderbilt, Erica had the surgery scheduled, and on June 13, 2018, Erica received her kidney transplant. Natasha’s surgery is still to be determined, but without her willingness to give, Erica would not have been considered as an option for this kidney.

The transplant has significantly increased Erica’s quality of life, both physically and emotionally. She is excited to have more energy and get back to life. And now, she says the feeling of knowing she has the option to have a child as indescribable.”

Erica sees her story as a way to help others and is excited to learn more about becoming a nutritionist with a focus on renal diet. She believes her ability to empathize will make a huge difference in the lives of her future patients. In addition to career changes, she also hopes to increase her advocacy efforts.

A lot of people don’t know they have kidney disease because it shows no signs, just like diabetes,” Erica said. If I can help someone else prevent going through all of that… then I definitely want to be a part of that. I feel like my whole life now revolves around kidney disease and diabetes. Any organization, whether it’s the Kidney Foundation or ADA– if they ever need my help, I’m going to be there.”

As REACH Kidney Care of Middle Tennessee’s first donor swap” transplant recipient, Erica is also committed to local outreach. In August, she attended a Mt. Zion Health Day at a local church to talk about kidney disease. She’s ready to help make a difference wherever she can. And to those on the wait list, she has just a few simple words of wisdom: Be patient and keep faith… You never know who wants to help you.”