We will conduct glucose and blood pressure screening as part of our kidney health monitoring at a local health fair. We will provide a cooking demonstration with a focus on low sodium and kidney friendly foods. Participants will be provided with a low sodium cookbook as well as ingredients to make one of the recipes. We are partnering with the Kidney Health Alliance of Kentucky, Boyle County Extension Service, and possibly other community groups.

We raised awareness of kidney disease in March which is officially recognized as National Kidney Month. We ran ads, posted flyers, published education articles, posted on social media, and then hosted our educational on-site event. During the on-site event we had 22 participants in the morning demonstration and 13 in the evening demonstration. A total of 16 people were screened for kidney disease. While the attendance was less than we had hoped for, the newspaper article and advertising of the event raised public awareness of kidney disease.

Advertising: 2 ads were in The Advocate Messenger newspaper on March 16th and March 20th. An article written by Alethea Price, Boyle Co. Extension Agent on low sodium cooking, prevention of kidney disease and the health benefits of a low sodium diet was also in the March 20th edition of The Advocate Messenger. The service project was also advertised in this article. Public service announcements were on the local Radio Station, WHIR. Flyers were made and distributed though out the community including at Wellness Centers, to dialysis patients and posters in local businesses and the public library. The event was posted on face book pages of KHAKY, Boyle Co. Extension Service and DCI Danville as well as on personal face book pages.

Power point Presentation by Pat Ham, executive director of KHAKY on incidence and prevention of kidney disease and a demonstration on sodium retention. Benefits of a low sodium diet and was also discussed.

Power point Presentation by Debbie Nichols, RD, (DCI Danville) on tips for reducing sodium when cooking with handouts “Cooking Without a Grain of Salt” and “ Tips for Limiting Sodium (Salt) when Dining Out.

Cooking demonstration by Alethea Price with recipe for a Chicken Stir Fry.

After the demonstration a drawing was held for 3 door prizes at each session, each person was given a choice of one of the following cookbooks-“Low Sodium Slow Cooker Cookbook”, “500 15 Minute Low Sodium Recipes” or “Renal Diet Cookbook”. Participants also received a take home bag with the ingredients to make the Chicken Stir Fry, sample packages of Mrs. Dash, True Lemon and Chef Paul low sodium seasoning packages, a low sodium pamphlet from NKF, and various cooking utensils. Flyers for another DCI Service Project in Lexington Ky. was also included in the take home bags.

Healthy low sodium snacks and bottled water were available for participants during the presentations and cooking demonstration. 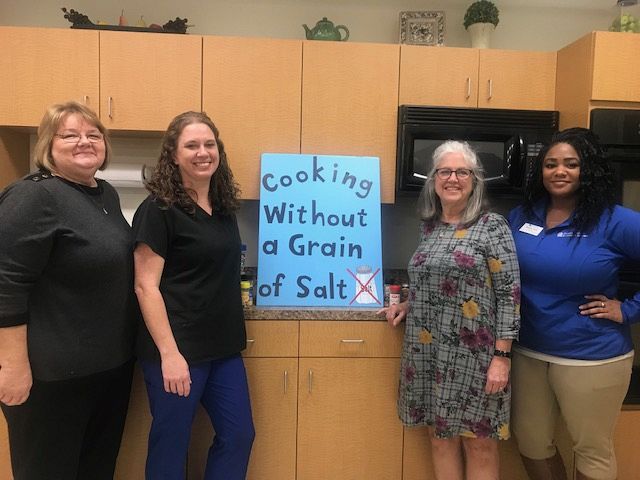