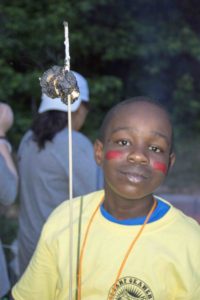 Being a kid with kidney disease can be tough. Early on, children with kidney disease realize they’re not like everyone else. People stare at the bulging access in their arm or look uncomfortable when they see the exposed surgical scars across their chest. While other kids can eat and drink until they are content, children on dialysis struggle with thirst because they have to monitor every sip they take. Instead of making new friends at school, they’re sitting in a doctor’s office, hospital or a dialysis facility. They often fall behind in class. Many have lowered self-esteem and struggle to make friends. Having kidney disease can make a child feel like her or she is alone. No one understands what they are going through. That’s why we have Camp Okawehna.

Camp Okawehna is a place where kids with kidney disease belong.  This year, nearly 80 children with kidney disease from city groups around the U.S. arrived on June 3rd at the Cedar Crest Campground in Lyles, Tennessee, to enjoy a week of summer fun. The children ranged in ages from 6 – 18 years old. Some children were on hemodialysis, some needed peritoneal dialysis, and others had a kidney transplant. Yet, all of the children understood that they fit in at camp. No one was ‘different.’ Everyone had a friend to share in the adventures at camp. 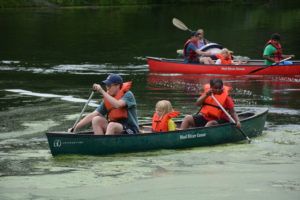 Every day there were new adventures and activities to explore. The activities at camp are designed to allow children from across city groups to get to know each other. Everyone had something fun to do.

Saturday: Campers were assigned to cabins and color competition teams. A pool party complete with s’mores around the bonfire made the evening sweet.

Sunday: Campers received their derby cars to sand and paint in preparation for Tuesday night’s race. They enjoyed their first round of archery, ropes course, canoeing, fishing, and crafts. Then as day gave way to night, the live band began to play and the children danced, played limbo, and sang the night away. The music carried all the way down to the bingo game for those who wanted to rest their feet. 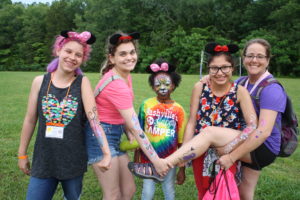 Monday: Circus Mojo provided a delightful start to the morning with their circus demonstration and hands on training. Between the big wheel walking, silk acrobatics, hula hoop spinning and clown antics, the kids were mesmerized. For the rest of the morning the kids rotated between circus training, field games, and the Home Depot sponsored crafts. The evening highlight included on-site carnival, complete with bouncy houses, a dunk tank, fire spinning, glitter tattoos, face painting, popcorn, and cotton candy. When it was time to wind down, everyone gathered together for a movie under the tent.

Tuesday: The morning activities included archery, ropes course, canoeing, fishing, swimming, crafts and field games. The much anticipated evening event was the Pinewood Derby. The six year winning streak for the girls was interrupted by the boys’ victory last year. The girls proudly reclaimed the Pinewood Derby victory for 2017!

Wednesday: Campers who were 16 years and older enjoyed the zip line at Adventureworks. The younger campers participated in field games and crafts. Then, everyone met back at camp for the always entertaining talent show. A non-partial panel of judges scored the acts and awarded individual trophies.  Sarah Adams was awarded first place, Rachel White came in second and Jacqueline Shaw took third. 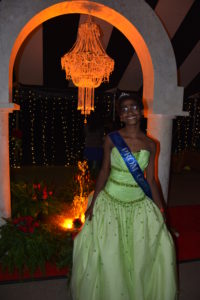 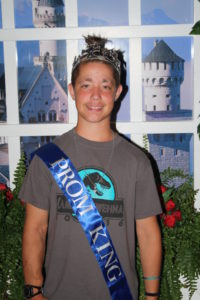 Thursday: The last full day of camp is always bittersweet. Campers enjoyed a wildlife demonstration. They engaged in the final contests that completed the color competition. In a very close battle for the win, the Red team managed to secure the Color Cup. Then campers enjoyed free time. The boys could be found at the basketball court or by the pool. Most of the girls were preparing for prom by making jewelry, engaging in hair and makeup sessions, and final prom dress fittings. A formal evening meal was served to campers by the medical intern counselors. The centerpiece of the night was a dazzling “Beauty and the Beast” themed prom. DJ E. Lee spun the hits and fulfilled many song requests. The evening ended with awarding of graduate certificates and the announcement of the prom king, Dylan Schott, and queen, Symone Charles.

Every year on the Friday morning of camp, kids gather together and say their goodbyes. There’s sorrow on the faces of many campers. They know they’ve just experienced a special place. It’s not the cabins, the pool, or the woods that make Camp Okawehna so special; it’s the people. The kids relate to one another. They are accepted. The adults reassure the children that they are loved. As they leave camp, they carry with them the joy of new friendships made and the renewed spirit of knowing there are other kids that understand what they are going through. Camp Okawhena is a place where kids with kidney disease belong. They are not alone.