Opening the Locked Door to Dialysis 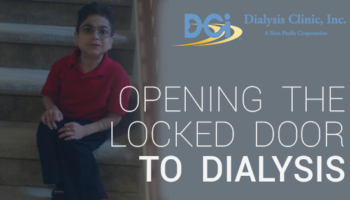 Justin, 21, has had kidney problems his whole life. In 2005, he had his first kidney transplant. About five years later, when that kidney’s function started declining, he was offered the opportunity for a second transplant. After two failed attempts over two years, his transplant team told him he would be unable to receive another kidney transplant, and eventually he would have to receive dialysis treatments to survive.

“Dialysis was something we put off for 21 years,” said Sharon, Justin’s mom. “He’s had renal problems since birth, so 21 years is a pretty good amount of time to delay it.”

Sharon said that for his 21st birthday, she took Justin to Las Vegas. When they returned from his celebratory trip, however, his health worsened. Sharon said she knew it was time to begin his dialysis.

Finding a dialysis unit close to their home in the Pocono Mountains, Penn., proved to be a difficult feat. Sharon and Justin began a weekly commute to Cornell Hospital in Manhattan, commuting for more than 20 hours per week for his three dialysis treatments.

“We called so many units in Pennsylvania and New Jersey,” Sharon shared. “Nobody would take us. Pediatric units wouldn’t accept us because Justin is over 18. Adult units rejected us because he was underweight.” 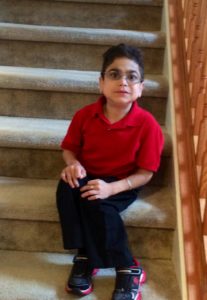 Justin is set to begin college this August. He is planning to study animation.

Justin, who weighs just 40 pounds, seemed to be a special case in limbo between the adult and pediatric dialysis providers in the area. Sharon faced trial after trial, stunned that not a single dialysis unit in Pennsylvania could help her son. The social worker at the Cornell dialysis unit called every hospital within a 60-mile range of Sharon and Justin’s house. Her results were just as grim: nobody was willing to accept him.

“I went and spoke with my local Senator about the lack of provision for people with kidney failure in our community. Because our case was so unique, he couldn’t really help us. I called the Quality Insights Renal Network 4…eventually, even they couldn’t help us. It felt like the Twilight Zone. Commuting to dialysis was a full-time job,” Sharon said.

Finally, Sharon spoke with Dr. Toros Kapoian, Medical Director of DCI North Brunswick in New Jersey. He assured Sharon it would not be a problem to dialyze Justin at DCI. Sharon completed the transfer paperwork and immediately their commute was halved. The commute to DCI is still 92 miles. The good news is that Dr. Kapoian was able to adjust Justin’s dialysis treatments to twice per week instead of three times. 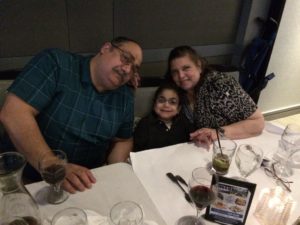 Justin out to dinner with his parents. His mother, Sharon, would spend hours thrice weekly commuting to his dialysis treatments.

Sharon said now her biggest concern is facing the winter. She fears Justin could get snowed in on a dialysis day, which has prompted them to explore peritoneal dialysis, which is completed at home. This July, Justin had a peritoneal dialysis catheter placed.

“The doctors said they were able to put in a small catheter. It may not work since he’s had so many previous surgeries,” she said. “But to us, it’s worth a try.”

Dialyzing at home would be a benefit to Justin as he will begin his college education this fall. In August, he’ll start school at North Hampton Community College, where he plans to study animation.