The medical team believes that the in-line transfusion between their fathers years ago may have played a role in the compatibility of the transplant.

Circumstances beyond her control have shaped Dorothy Krummel’s life, for better and worse. Yet, the bigger picture has worked in her favor and unexpected individuals have carried her though her darkest moments.

Dorothy’s story begins before she was even born, when her 18-year old father, Robert J. Safran, enlisted in the military as an Army Airborne Ranger. Private Safran served in the First Airborne Ranger Company along with his friend, Private Wayne Sharpe. At one point during the war in Korea, Private Sharpe was injured and bleeding profusely on the battlefield and had to be transferred to the med station. A direct donor-to-recipient, in-line, transfusion was needed to save Sharpe’s life. Safran, with his A+ blood type, volunteered to be his donor.

The bond between Safran and Sharpe continued well beyond war time. As both men returned home, each married and had daughters. The two families became friends. They stayed in touch, often meeting and reminiscing at Ranger conventions.

Unexpectedly, in 2008, Dorothy found herself fighting for her life in a sterile hospital environment. She was told by doctors that, among other things, she was experiencing acute kidney failure. The medical team was able to provide emergent dialysis to Dorothy and help her recover 38% of her kidney function. While Dorothy was grateful to the medical team for saving her life and restoring partial kidney function, she understood that she would continue to battle the threat of kidney failure. Her life was forever changed.

Dorothy left the hospital and returned to Florida to work at her cousin’s family-owned zoo, Dade City’s Wild Things Zoo. Dorothy’s life revolved around the zoo. She adored training the baby animals. She took pride in running the gift shop. And, she even found solace in cleaning cages. Yet, in the back of her mind, Dorothy wondered about her Diabetes, Lupus and impending kidney failure.

In 2015, Dorothy wasn’t feeling well. In a three day span her glomerular filtration rate (GFR), that indicated how well her kidneys were working, had dropped from 15% to 8%. She knew the time had come where she’d have to make a decision about kidney treatment. She decided to pack all of her things and head to her mother’s house in Columbus, Georgia, to be more accessible to Emory University Hospital where she’d begin working toward a transplant. During the difficult time of packing, Melissa Sharpe, Lt. Col. Sharpe’s daughter, reached out to Dorothy. She refused to let Dorothy make the drive on her own. It was during that journey that Melissa told Dorothy she wanted to be her living kidney donor.

Dorothy was humbled and honored by Melissa’s offer to provide her with a kidney. In September of 2015, Dorothy contacted Emory’s Living Donor Kidney Transplant Program and scheduled the beginning of many appointments. The first task was to evaluate the compatibility of Melissa’s kidney for Dorothy. The typing and matching test results showed that that Melissa’s kidney was a 98% match, which is unheard of in non-related donors. The medical team believes that the in-line transfusion between their fathers years ago may have played a role in the compatibility and this will be researched in the future.

While waiting to schedule her transplant, Dorothy needed dialysis. She visited one dialysis provider and then moved to Dialysis Clinic, Inc. (DCI). She was appreciative of the wonderful dialysis team that kept her going, especially the social worker. Yet, she admitted that being on dialysis was very hard. She would start her four hour treatment and count down until it was time to leave. She did this every Monday, Wednesday and Friday. She never had much energy while on dialysis and just when she would regain her energy over the weekend; it would be time for another treatment on Monday morning.

Thankfully, September 22, 2016, Dorothy was scheduled for her kidney transplant. The surgery was to take place at Emory University Hospital with recovery at the Mason Guest House. Melissa received support from the American Kidney Fund (AKF) to help with transportation cost to the hospital and the stay at the Mason Guest House. All plans were in place. The surgery was scheduled. It was a success! Dorothy reports that when her new kidney was grafted in, it began to make urine immediately.

“When I woke up after the transplant, I knew I was alive again,” said Dorothy. “I stood up and had no chest pain. I felt so good.”

Dorothy has a six month observation period before she is able to return to life at the zoo. Her family has taken steps to ensure that she will be well-protected when she returns. “I’m excited to get back to the zoo. We’ve had to make a few adjustments; the birds are no longer in the gift shop; I can’t clean cages; and I’ve got to wear hazmat gear at times. But, it’s worth it.”

Dorothy and Melissa are planning to write a book detailing the events of their fathers’ experiences and how it has impacted both of their lives. They intend to sell the book to raise money for living organ donation.

On the battlefield one friend reached out and restored life for another. That kindness manifested into a daughter’s desire to donate life. While it’s not always immediately obvious, every act of kindness continues the cycle of hope. 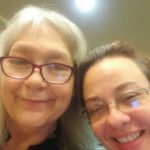