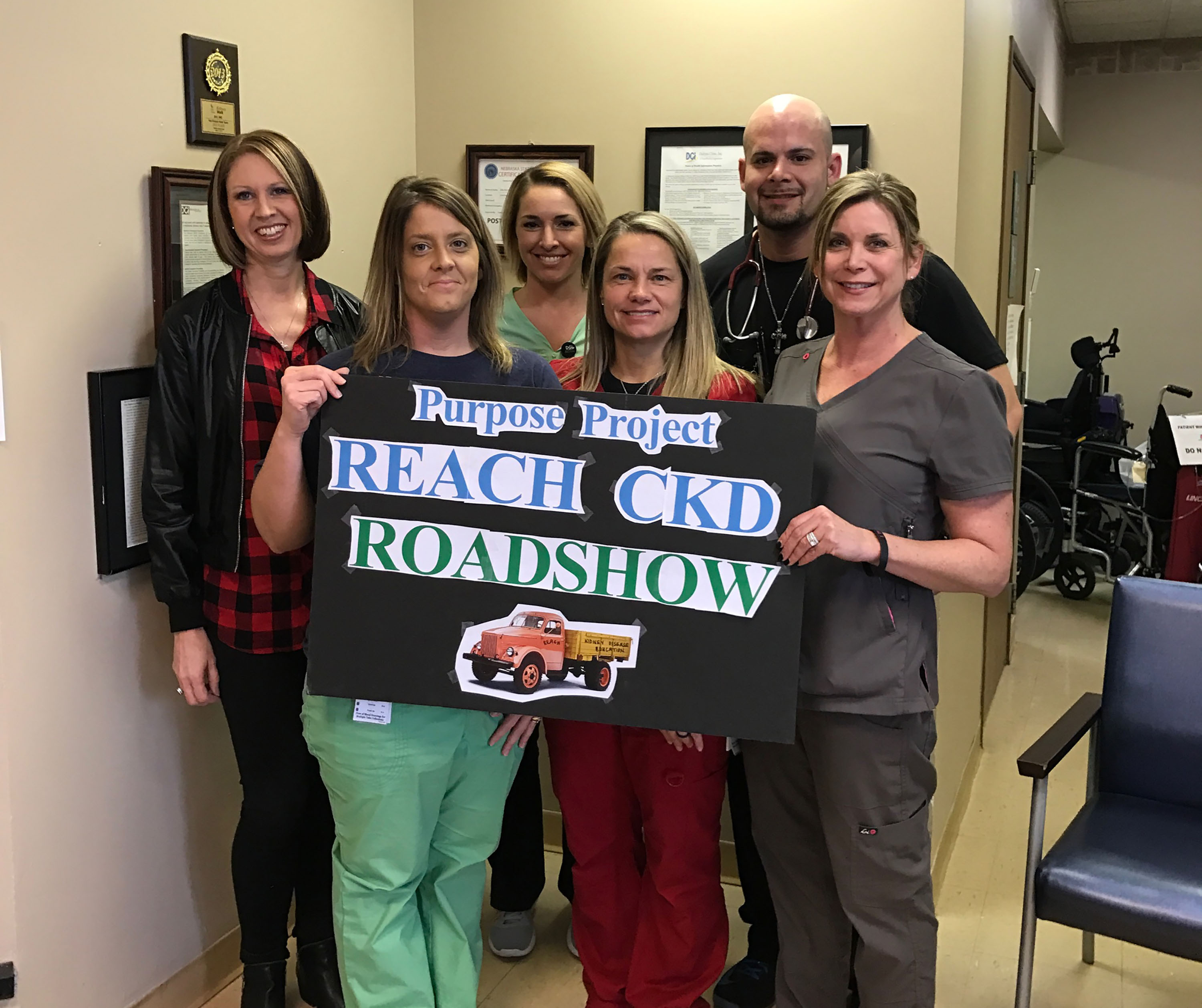 In efforts to educate the general public about CKD, I decided to set up a booth and put the REACH logo and information into the hands of as many as I could over the past 8 months.

My first stop on the CKD Roadshow was an educational event held in coordination with the Transplant team at Nebraksa Medicine. We invited REACH participants with eGFR of <30 and their family members to attend. The event was held at the Nebraska Medicine Campus on Tuesday, March 7th. A total of 23 patients and family/friends attended the event. It lasted over an hour. Presenters were Dr. Clifford Miles, Transplant Nephrologist and Director of the Kidney Pancreas Transplant program, Dr. Scott Westphal, Transplant Nephrologist,  Victoria Hunter, RN-Manager of the Kidney/Pancreas Transplant Program, Dr. Arika Hoffman – Kidney/Pancreas Transplant surgeon and Vascular Surgeon. Also on hand were Lisa Runco, Executive Director Cardiovascular, Digestive diseases and Kidney Disease Clinical Programs, Shanda Ross, Director Digestive and Kidney Diseases. Tiffany Spethman, RN, Transplant and Vascular Nurse and Gina Rau, RN, Living Donor Transplant Coordinator. Information regarding every aspect of transplant was covered. Patients were allowed and encouraged to ask questions. The Transplant folks remained in the house until after the last question was answered.

Next on the tour was Omaha Health and Wellness Expo. This event was April 8th and 9th. It was free to the public and we had thousands of people pass by, stop to chat, have a b/p check and sign up to win one of two b/p cuffs that we gave away. I did have to recruit some helpers for this big event. A big thank you to the DCI Staff that assisted me with this endeavor. To encourage volunteers – we even provided a lunch to the unit with the highest percentage of their staff to step up. To give up your free time on the weekend is so generous. I couldn’t have done it without Beth N, Jen W, Sheila S, Liz, Gwen, Tracy, Sara D, Joanie, Teresa and Jacque. A pizza party was held at DCI West Omaha as they were the unit with the most helpers. Thanks to all who pitched in! We gave out trinkets, REACH brochures and wallet cards, Folders and AKF handouts as well as referral forms. We got our name and Logo out into the hands of many.

My third stop on the Roadshow was another Evening of Transplant Educatin held at Nebraska Medicine. Transplant Team members were there again in full force to share their wealth of knowledge with REACH Participants that are interested in exploring the treatment option of transplant. There were 20 patients and family/friends there. It was another successful turnout.

On to Stop Number 4:  Optum Innovations in Transplant Conference presented by Nebraska Medicine Transplant. I was able to have a booth as a vendor. Participants were Dr’s and Nurses from several states. My partner in crime for this event was REACH social worker, Tami Lusvardi. REACH was well received and we were able to provide give aways with the REACH logo as well as REACH brochure’s, business cards, referral forms and we even shared our most recent Omaha REACH outcomes with care providers. More than one attendee approached our booth and said “I hear you all are doing something amazing, and I have to hear about it”. The interest and enthusiasm and praise that REACH received was very heartwarming. As a result of this event REACH information has reached the Nebraska/Colorado border clear up into Minnesota.

The Last Stop on the Roadshow was held Saturday, July 22nd. The Family Health Fair at Greater Beth-el Temple here in Omaha an awesome event and a great way to get the REACH/CKD information out into the public. I am told that the numbers were down due to the heat at the time, but I still felt it was a great success. I partnered up with Tim Neal of Nebraska Kidney Association. Tim, I and Victoria Hunter and Shanda Ross of Nebraska Transplant and Dr. Aubray Orduna-College of St. Mary Dean of Nursing – worked together. We offered B/P checks, blood tests that gave blood sugar readings and creat and eGFR as well as urine testing for protenuria. We screened 29 participants. We found that 11 had systolic hypertension, 5 had diastolic hypertension and 5 had both systolic and diastolic hypertension. 9 had diabetes, 4 had an eGFR that placed them in CKD 3 or 4. 8 had a trace of protein in their urine. I was able to give out NKA CKD handouts as well as REACH brochure’s, REACH referral forms and information about Diabetes and Hypertension and Kidney Disease. We also gave folks REACH pens. This event was very rewarding. I am so happy to have some new friends and new connections in the Kidney World here in Omaha. This Networking is very powerful in getting CKD information out into the public.

The Purpose Project has been wonderful. I was able to purchase pens, flashlights, post-it notes, folders and a pop up banner. If we can get a REACH pen into someone’s hands – maybe they or a friend will think of REACH when they need it most and ask their Dr. for a referral. The purpose project has made  REACH and  CKD exposure catapult into Omaha. And – I’m not stopping now!

I have the Omaha Kidney walk in October, the PKD walk in September, Diabetes Education in October and I will also be presenting CKD information to nurses and staff at the RoseVista Nursing Home in Woodbine, Iowa – date yet to be determined. I’ve asked the Nebraska Kidney Association to count me in as a partner for any upcoming events.

I can truly say that the Purpose Project – CKD Roadshow is just the tip of the iceberg in my efforts to fight CKD.

My Purpose is to spread the word. I want to plant a seed in the minds of the folks at risk for kidney disease. If a person is underserved – they may not have a close relationship with a health care provider. They may not know the importance of managing their blood pressure or diabetes. Chronic kidney disease is a silent disease and so is hypertension and diabetes- “If I feel good, I must be OK” and that just isn’t the case. If people are educated – it can help them avoid a myriad of complications. It can give them a better life. I can’t think of anything more rewarding.