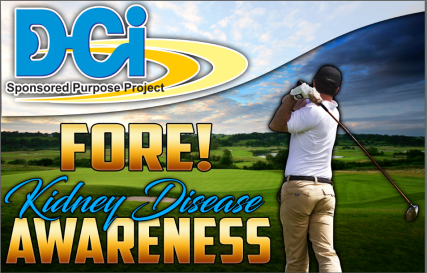 When the DCI Public Information team sent out the email that DCI was sponsoring the purpose project for 2017, the staff at ELO got together and decided to have a golf outing to raise awareness for kidney disease. Most of the staff were not familiar with golf and thought it would be like watching it on TV with their spouses. Boy, were they surprised as the day turned out to be a blast for both staff and the participants. We ended up getting 14 teams of four for a total of 56 golfers.

The day started with staff registering the golfers and selling tickets for the 50/50, Chinese auction and the lawn mower. As the participants bought the tickets and mingled with the staff, we talked about DCI and kidney disease, as most people were not familiar with kidney failure and dialysis. We went over the rules of the outing and then spoke about the Western PA Kidney Kamp for Kids. We also made the golfers aware that on each tee box there would be signs with kidney fast facts.

The participants then started their round of golf and the staff jumped in the carts to take pictures, some of the staff on a golf course for the first time. As the golfers completed their first nine and came in at the turn they had hot dogs, chips, and refreshments. As they spoke with staff and each other, they talked about how much fun they were having and mentioned they were reading the kidney fact signs. With about 4 holes left the rain started, but it didn’t damper the spirits of the golfers as they continued their round.

As the teams finished their round of golf and returned to the clubhouse, they had a meal catered by L & B Donuts and Catering. It was then time to draw the winners of the Chinese auction, 50/50 and the lawn mower. After tallying the score cards, the winners of the skin holes were announced, with 3 teams winning skins. Then the 4 hole prizes of $25 each were handed out. Next we handed out the prize money for the winning teams. First place and $400 went to team Hambleton with a score of 17 under. Second place and $300 went to team Shanks with a score of 15 under. Third place and $200 went to team Skinner at 13 under.

As the golfers gathered their clubs to head home, they had nothing but praise for the event and said they would play again next year if we held it. Overall it was a great time had by all and around $1000 was raised to be donated to the Western PA Kidney Kamp for Kids.

The purpose of the project is educate and promote kidney health as well as physical well being. Any proceeds from the event will be distributed to local charities including, but not limited to, the Western PA Kidney Kamp, team MOJO, the tiger closet and others. Local nursing students will be assisting with BP checks and the local hospital will be invited to attend. We have also invited the local dialysis care coordinator to attend.