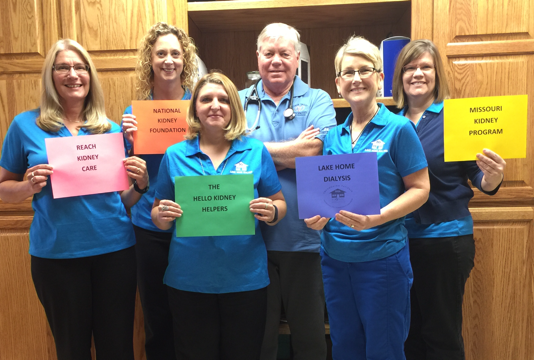 As a group we set out to educate as many Missourians as possible about how important kidneys are and how to keep them healthy. We not only spoke to many fellow Missourians but also many people from all over the world. Last year over 356,000 people went to the annual fair. We don’t have the census back yet, but Saturday August 12th was a record breaking day. We had a booth set up in the Mathewson Exhibition Center that was open daily from 9AM until as late as 7:30 PM for 11 days straight with the help of nurses, dietitians, social workers, our AOD and Medical Director, family members, The National Kidney Foundation (NKF), The Missouri Kidney Program (MOKP), a transplant patient and a spouse of a former patient. DCI volunteers even included home nurses from outside our region.

Our goal was to get as many people participating as possible. We asked them “Do you know what your kidneys do?” then proceeded to tell them and giving them a Koozie with the 5 jobs listed. We all wore T-shirts also with “5 jobs” on them. 5,000 koozies were given out! We had Kidney Rock present and once the kids were interested the parents also got involved. We tried to get people to post on social media by earning a raffle ticket for our daily drawing using #KidneysDoWhat on Face Book, Instagram and Twitter with instructions to tag DCI. The raffle prizes were given away daily. Prizes were mostly donated and included: Sporting Kansas City Soccer tickets, BP cuffs, lunch bags, T-shirts, KC Chiefs tailgating kit, Water bottles, and more. Mostly we just let anyone who would listen to our cause sign up.  We had a table full of brochures, recipes, handouts on CKD classes, how to donate a car, organ donation information, how to talk to your PCP about kidney health, etc. When we talked about what our kidneys do we always brought up the 2 leading causes of CKD and ESRD: Diabetes and Hypertension.

We not only spoke to people from our booth but we also walked around the fair grounds and spoke to people about the important jobs kidneys do.  Some of our favorite quotes include; “You are the most enthusiastic booth we have seen!” “Thank you for what you are doing, I know someone who…….” But our favorite was “I had no idea my kidneys did all those things” and “I learned something new today.”

The volunteers all learned from one another as well. Many stated they plan on networking with each other and the outside organizations that participated. Team work makes the dream work and we pulled it off!  Thank you DCI!!

More than 356,000 fair goers from all over the state attended the Missouri State Fair in 2016. Lake Home and Reach Kidney Care’s goal is to make our population aware of kidney disease.