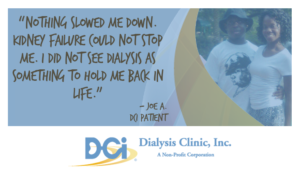 Our patient, Joe Allen, has known about the power of a positive attitude for a long time.

At five years old, both of his kidneys failed and he was forced to begin peritoneal dialysis treatment immediately. From the beginning, he never saw his dialysis treatment as a setback, but just something he needed to get through until he could get a kidney transplant. Sure enough, later that year, his father found out he was a match and donated a kidney to him, enabling him to live freely again without dialysis treatments.

The idea of positive thinking leading to positive health outcomes is seen as a viable reality today. There seems to be a phenomenon around the power of positivity, especially when it comes to chronic illnesses, such as kidney disease. But how much scientific or psychological truth is behind this hackneyed axiom? Can a hopeful outlook, an optimistic perspective really alter your overall health and wellbeing?

Joe, one of nine siblings, was the only child whose kidneys failed in the family. At seven years old, about two years after he received his father’s kidney, his body rejected it. Although his siblings offered to see if they were a match, he didn’t want to put their life on hold for his disease. Joe refused to put his own life on hold, too. He continued to go to school and dialysis treatments, and he committed to never feeling sorry for himself or become depressed by his health circumstances.

There is a certain stamina required to overcome the struggles associated with kidney failure, and Joe had this endurance. After his first transplant failed, he began in-center treatment at Tulane Dialysis, continued to play football and basketball and was in his school’s marching band.

“Nothing slowed me down,” he said. “Kidney failure couldn’t stop me. I did not see dialysis as something to hold me back in life.”

For the next ten years, he continued in-center dialysis. In high school, his nephrologist restricted him from contact sports, but he maintained an otherwise typical student life, continuing on to march in the marching band and date girls throughout high school. Joe said people didn’t see him as sick because he didn’t see himself as sick.

In 2012, a Columbia University study was published about the benefits of a positive attitude for patients with chronic illnesses. Just like our patient Joe, the study found that patients who used daily self-affirmation techniques exercised more and complied with their treatment plan better than those who didn’t.

In May 2004, when Joe was 24, he received a second kidney transplant. That transplant lasted more than a decade, until December 14, 2014. Joe said one day he felt like he was coming down with the flu, and that evening, doctors had to remove his transplant. This too could have been seen as a trauma or hindrance, but instead, Joe looked to the bright side of things, focusing on his gratitude for the gift he had been blessed with for the last ten years.

“I did not let myself get down that I was losing my kidney transplant. Instead, I thanked God that it had lasted so long,” he said.

For a year and a half, Joe was back on in-center dialysis at DCI West Banks in Louisiana. Recently, he and his fiancé began training for home hemodialysis, which they see as a new opportunity to enhance their confidence and make kidney failure a little bit easier on his body. At the end of February, he began his first dialysis treatment at home.

Treshiki Bentley-Giles, RN at DCI West Banks, said that every time she saw Joe, he would ask when he could start his home hemodialysis program.

“’Am I going to be ready to start before my cruise this summer?’ he would ask,” she said. “And man, he was on it! There was no complaining or doubt from him, just determination to pursue the best option for himself.”

Often, we use hope as a strategy to overcome an illness or hardship. One study found that “optimism appears to provide protection against some negative perceptions of illness and was associated with better mood”. Another study found that “evidence suggests that these effects [optimism and hope] may have something to do with the mind’s power over the immune system”

Joe’s natural optimism is in line with these studies. It seems that the more we dig into the correlation between attitude and reality, the more evidence supports the idea that they actually do in fact affect one another. Joe’s viewpoint is simple: he refuses to see dialysis as the end of his life and freedom, but rather a lifesaving treatment for a few hours a week to keep him going. And the results are just as clear–people don’t see him as sick or depressed.

What do you believe? Do you think that “seeing the bright side of things” has helped you or a loved one cope better with kidney disease? Leave a comment below and let us know.