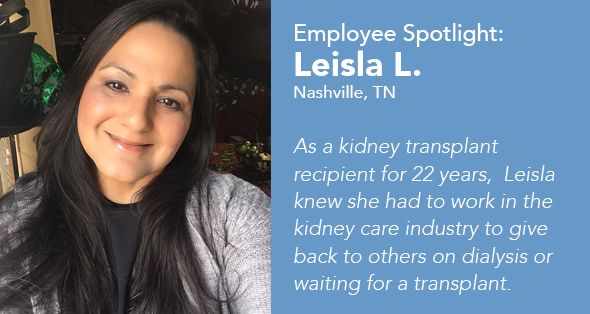 For most 16-year-olds their biggest concerns are typically centered on obtaining a driver’s license or who they will take to prom. Leisla Lugo, however, had a different concern. She was diagnosed with glomerulonephritis, a rare disease that can cause kidney failure. By the time she was 16, her mind was occupied with thoughts of dialysis.

Most teenagers don’t think about their kidneys failing, nor do they have to consider the treatments needed in order to stay alive once the kidneys fail. Leisla quickly learned that dialysis would clean her blood since her kidneys no longer functioned. She also learned that a transplant would be needed if she were to ever stop dialysis.

After two years of dialysis, Leisla’s mother felt like enough was enough. She had seen the toll the weekly treatments were taking on her daughter and she was prepared to be her living kidney donor. After testing revealed they were a match, Leisla received a kidney transplant from her mother in 1985.

“Receiving a transplant changed everything in my life,” Leisla explained. “My whole world lit up. It was truly day and night. Even at that young age, I felt like I had been given a purpose to connect with others going through kidney failure and provide them with hope.”

With dialysis out of the way, Leisla was able to pursue her life more fully. She immigrated to Florida from Puerto Rico and continued to look for different ways to connect with dialysis patients. For eight years, she worked as a travel coordinator for dialysis patients wanting to travel to Latin America.

In 1994, however, Leisla’s health took a turn. Her doctor told her that her transplanted kidney was failing. She had to return to dialysis and put her name back on the transplant wait list. Yet just six months later, she received a transplant from a deceased donor in Orlando, Florida. This transplant is the same one she has today, nearly 23 years later.

Leisla believes that receiving her second transplant was truly a special gift. Over the next two decades, she continued to pursue opportunities to serve others with kidney failure. Eventually, she made her way to Nashville, where she began to volunteer with the Tennessee Kidney Foundation. While volunteering at an event, she learned of Dialysis Clinic, Inc. (DCI).  Leisla had never heard of a dialysis provider who was non-profit; she was intrigued.

Shortly after, she realized she had an old friend who worked at DCI.  Leisla desired to keep making a difference in patients’ lives, so she reached out to her friend to see if DCI truly lived up to its nonprofit mission. Her friend affirmed the mission was genuine and encouraged Leisla to visit the website to learn more. After discovering Camp Okawehna, DCI’s summer camp for kids with kidney disease, on DCI’s website, Leisla knew she “had to be a part of it” and applied to be a billings specialist in the corporate office. She had her first day of work this February.

“My purpose is to help others. The more I learned about DCI, the more I realized how much the organization truly puts the patient first. I knew I had to work for DCI because I wanted to be a part of other people’s kidney disease journey, even if in a small or subtle way,” Leisla shared. “I am in awe of DCI, and this is the beginning of a new story.”