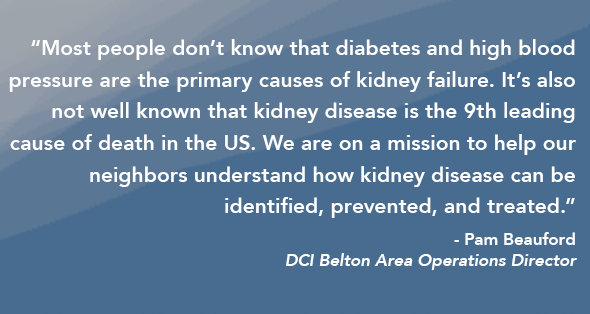 Belton, MO. (Jan. 4, 2017) — DCI Belton is the recipient of the Darwin Peterson award, the highest quality award bestowed on a clinic by the nationwide non-profit Dialysis Clinic, Inc. (DCI).

The Darwin Peterson Award is presented to a clinic that exemplifies excellence in areas that include:

Beyond DCI recognition, DCI Belton has also received a Five Star rating from the Centers for Medicare and Medicaid Services (CMS).

“We want to let the community know that we are an excellent dialysis provider, yet we offer so much more than just dialysis,” stated Pam Beauford, DCI Belton Area Operations Director.

The DCI Belton team is part of the DCI Kansas City family of clinics. Together, the staff hosts educational events to raise awareness of kidney disease.

“Most people don’t know that diabetes and high blood pressure are the primary causes of kidney failure. It’s also not well known that kidney disease is the 9th leading cause of death in the US,” explained Beauford. “So, we are on a mission to help our neighbors understand how kidney disease can be identified, prevented, and treated.”

This is the fourteenth year in a row that DCI patients have had the lowest mortality and hospitalization ratios when compared to national providers and the national average.

The 2016 USRDS report analyzes data from 2014. All ESRD patients, regardless of insurance coverage and age, are included in the USRDS database.